Many workers troubled with inferior labor conditions are in Okinawa. But, such a worker does not have a labor union.
Although RENGO Okinawa has a supporting system to such workers, this system is almost only a pretense.
Surprisingly, the items which are outstanding on their homepage are only the notice of the meeting against US military bases in Okinawa and a notice of the golf meet. The union’s web updating has stopped even at the page of their official bulletins.
On the homepage of the Okinawa Teachers Union, which is most influential labor union in RENGO Okinawa, the actual situation of activities on their homepage is considerably groundless like RENGO Okinawa.

The page of the bulletin of the Okinawa Teachers Union has not been updated for two years (see upper right pic). Of their activity records, the records on an anti-US base movement is more conspicuous all the time rather than the records on the level of education or an improvement of educational conditions in Okinawa.

Although they have a right to perform movement which is opposed to the US military base, they have a lot of thing to do other than this movement. 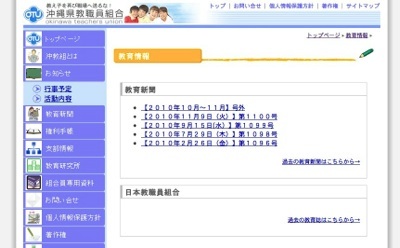