Two U.S. Navy seamen were arrested in Okinawa on Oct. 16 for a rape that has incensed residents of the southernmost prefecture.

It is not surprising that Okinawa Governor Hirokazu Nakaima expressed outrage at the crime by saying, “This is just insane.”

The two suspects were in Okinawa on an official trip from the U.S. mainland. They allegedly raped the victim before dawn on the morning they were to depart Okinawa for Guam. Did they think they would not be caught once they left the island?

In 1995, the rape of a schoolgirl by three U.S. Marines in Okinawa provoked widespread fury among local residents. The incident led to fresh negotiations between Japan and the United States over a realignment of U.S. military bases in Japan and the issue of how to handle crimes and accidents involving U.S. troops.

But there has been no end to crimes by American soldiers in Okinawa. Sex offenses committed by U.S. servicemen in the past decade include the rape and molesting of junior high school students and a rape resulting in injuries. In August this year, a woman was injured when she was indecently assaulted. It seems highly likely there were other victims, but they didn’t report the crimes to police.

A growing number of people in Okinawa, citing the massive presence of U.S. forces in the prefecture, fear for the safety of women and children there.

＜U.S. Troops stationing for what is it really? ＞

For what purpose are the U.S. Troops stationed to Okinawa? The illegal entry into private residence by the U.S. soldier who got drunk with the alcohol, which occurred, in Yomitan village, Okinawa, and a case of bodily injury occurred.

The U. S.Troops curfew, which has issued after the raping case by an U.S. soldier in mid-October, was broken frankly. If U. S. Troops cannot keep order of Okinawa, all the base in Okinawa should be closed down soon.

The both newspapers insist that crime by U. S. soldiers threaten the order of the area or the whole Japan. The editorial of Tokyo Shimbun is the extreme case, it requests closing of all he base only for a reason of the crime by an U.S. soldier. These articles are too ridiculous. At such news, I have been at a loss for words.

Of course, there is a background in such a posture of the journalism. Under Japan-US Security Treaty, approximately 75% of the U.S. bases relative to total area of exclusive U.S.bases in Japan are concentrating on Okinawa, and 50,000 people who are half of U.S. Troops, civilian employee and their families of Japan live in Okinawa. The Japanese journalism thinks that the massive concentration of the U.S.Troops to Okinawa forces an excessive burden so as not to be able to permit for inhabitants of Okinawa.

But, the noise of military airplanes, which is the representation of damage resulting from bases, has occurred only in the limited area around bases, not in the whole islands.  Although there were also unhappy military plane crash or mishap in Okinawa, they are not necessarily concentrated only on Okinawa. Criminal cases, such as murder, rape, injury, and burglar by U.S soldiers, which were serious and frequent in 1960‘s – 1970‘s, are also sharply decreasing in recent years. Japanese government and U.S.government also plan the phasedown of the bases. But, there are some groups, which have developed the movement requesting “instant and complete withdrawal of U.S.bases” in Okinawa, and they are opposed to the plan of the governments. Subsequently, this confrontation obstructs the phasedown of the bases. We have to think about not only downsizing U.S.bases in Okinawa and realistic reduction of the burden to the residents in Okinawa caused by U.S.base concentration, but we also have to think about the national security and the collective security with U.S. and so on. If such crime cases bring about any critical situation in Okinawa, we have to promote the immediate withdrawal of the U.S.base from Okinawa. However, with reference to the statistics on the trend of crimes and accidents by U. S soldiers in Okinawa, the possibility that such crimes plunge the whole Okinawa into danger is very low. So, the crime by the U.S. soldiers cannot become the legitimate ground of the US base removal. It is ridiculous!!  It is nonsense! 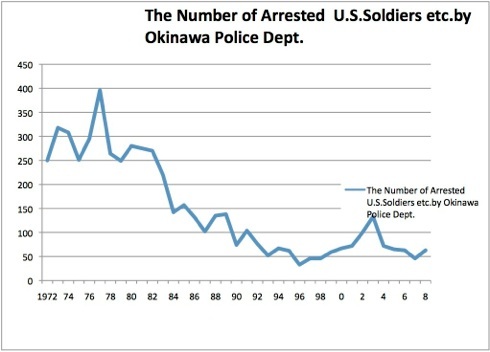 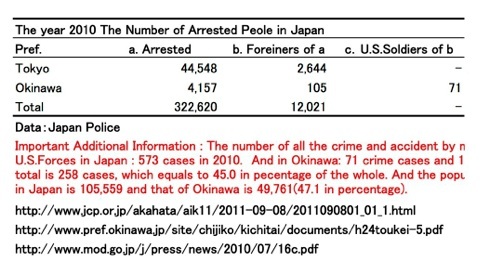 The journalism, some political groups and local politicians neglect this truth. We have to analyze the true reason why they exaggerate the case of the U.S. soldier and why they do not want to look at the truth.

So I have pointed out repeatedly that anti-U.S.base movement has a character and function to bring money to Okinawa from the central government and keep the ancien régime ruled by the local government workers of Okinawa.

Okinawa has made a large amount of benefits from the presence of U.S.bases. Although economic relevance of U.S. bases are reducing year by year, the subsidy from the government given to Okinawa as compensation for acceptance of U.S.bases, has still reached the large amount. A kind of lobbying activities of the movement against U.S.bases, which seems to swell in surface, has appealed to support anti-base movement to the governor of Okinawa and mayors of municipal bodies in Okinawa. Such an opposition movement is mainly led by labor union leaders of local government workers, its alumnus, and the political activists emigrated from the mainland of Japan. The governor and mayors have succeeded in fully drawing out the subsidy from the central government by siding with the anti-base movement. The anti-base movement is a kind of pressure on the government of Japan.  The rate of the independent revenue sources of the self-governing bodies in Okinawa are about 30 percent or less in average, and all the insufficiencies of the budget are provided by the subsidy of the central government. From the viewpoint of local public finance, Okinawa is treated favorably farther than other prefectures by the government.

So, I think that the anti-base movement of Okinawa has played the role of the hermetic art for drawing out enough money from the central government. Historically, Okinawa has a special socioeconomic system which local government workers has ruled, and the anti-base movement has also function of device which maintain and operate such an ancien régime.

However, together with the journalism, the Okinawa governor is blaming the U.S. Troops up. Even the weak-kneed Japanese government has stated the complaint about the soldiers’ crime cases to U.S government and the U.S. Troops. Such bashing to U.S. Troops is only the means for subsidy acquisition.

We have to make an effort to discern truth calmly. It is necessary to improve the situation, which a specific individual and organization distort. Otherwise, Japan will miss the way, which solves national security problems and U.S.base problems.