*This text was written as a follow-up for students of a special lecture held at a university.

1. Sovereignty of the Senkaku Islands

In the beginning of this text, I would like to show the following conclusion of mine on the matter of the sovereignty over the Senkaku Islands.

As long as we look at the historical backgrounds since the late 19th century, the sovereignty and dominion over the Senkaku Islands belongs to Japan.

However, when we consider the historical records as far back as the 16th century, there were more than a few unclear parts. In 16-18 centuries, the Senkaku seem to be recognized only as a mark on the sailing for Japan and Ryukyu.Senkaku. While there is a statement that, in an ancient text of China, there is a sentence “Taishojima(of the Senkaku Isl.) is the border between China and Ryukyu”, but in another texts, the Senkaku is described that “it belongs to Taiwan” and “Taiwan belongs to Japan”. It is clear for us that these texts are the evidence that China had not sufficient knowledge about the Senkaku.

And there is also an ancient text called “Tsukai Ryukyu Roku”(in Japanese pronunciation) written by a chinese official envoy to Ryukyu, published in 1534, which might give one of the most effective grounds of Chinese sovereignty over the Senkaku. Chinese government insists that this text has historic records on Chinese dominion over the Senkaku. But as long as I check sentences of the text carefully, there is only geographic description about the islands in his voyage for Ryukyu, on the contrary I found another description said “we were not able to go on a voyage for Okinawa without the pilotage of the Ryukyuan crew “. This means that Chinese crew at that time did not have the accurate knowledge about the chart around the Senkaku. However, in those days neither the Chinese nor the Japanese seemed to have the accurate knowledge about Senkaku.

So We are able to assert that until the 19th century, for both China and Japan, the Senkaku Islands were only “the marks on the voyage” and not object to rule.

Investigation of the Senkaku by Japan started in 1885, fishery base and factories were established in the early 1890s. Up to 240 people resided there and worked in factories and fishing boats. During this period, from the Qing Dynasty no protest came. “No protest” from china is a very important point. It should become the greatest basis at the time of asserting dominion of Japan. Since the Qing at the time had been negative also in the Taiwan management, they were hardly interested in Senkaku.

“Cairo Declaration” was announced under the joint signature of American President Franklin Roosevelt, British Prime Minister Winston Churchill, and the Nationalist-Chinese-government president Chiang Kaishek, on December 1, 1943. This was an agreement upon their interest after forthcoming Japanese defeat. Although this does not remain in the form of the official document, according to press information etc., it could be the following declarations.

It is their purpose that Japan shall be stripped of all the islands in the Pacific which she has seized or occupied since the beginning of the first World War in 1914, and that all the territories Japan has stolen from the Chinese, such as Manchuria, Formosa, and The Pescadores, shall be restored to the Republic of China. Japan will also be expelled from all other territories which she has taken by violence and greed.

According to this declaration, whether the Senkaku was included in the expression “Taiwan and the Pescadores” or not is not clear.

Japan surrendered by accepting the Potsdam Declaration under the joint signature under the U.S., the U.K., and the Republic of China leaders in 1945.

In the Potsdam Declaration, although wording of “carrying out Cairo Declaration” also attracted attention, the territory of Japan was limited to Honshu, Hokkaido, Kyushu, Shikoku, and islands where three states above had determined, and Amami, Okinawa and Ogasawara were not included.

(8) The terms of the Cairo Declaration shall be carried out and Japanese sovereignty shall be limited to the islands of Honshu, Hokkaido, Kyushu, Shikoku and such minor islands as we determine.

However, after the possibility of the seabed resources of the Senkaku ocean space was pointed out in October 1968, China and Taiwan began to assert their dominion suddenly.

Although Prime Minister Chou En-lai (China) and Prime Minister Kakuei Tanaka (Japan) talked together in 1972, the dominion problem of the Senkaku Islands should be shelved as a matter of fact at this time. Since then, although the political position “both countries should not positive touch in the dominion of the Senkaku Islands mutually” was to foundations, some fishermen and political groups of China and Hong Kong sometimes invaded the border and caused friction involving the Senkaku Islands. On the other hand, the right-wing groups of Japan landed a few times at the Senkaku Islands, and they took some actions such as building a lighthouse. The frequency of Chinese invasion into the Senkaku has increased since 2000’s. A part of Chinese invasion into the Senkaku has the doubt performed by the Chinese government initiative while they glares at the Japan-U.S. relationship.

Although the opinion that Japan-China relations are worsening by the action of the Governor of Tokyo Shintaro Ishihara (resigned on 31. Oct. 2012 for the coming lower house election), who advocated nationalization of the land of the Senkaku earlier than whom, become stronger both in Japan and China, it is not fair. Since the nationalists and fishermen invading into the Senkaku from China (Hong Kong) and Taiwan are increasing rapidly in recent years, and even serious trouble occurred between them and the National Coast Guard of Japan, we cannot blame the action of Shintaro Ishihara.

Speaking conclusively, although there is a problem in the view of the Japanese government, which insists that “there is no territorial problem in the Senkaku”, as long as we see the circumstances on and after the second half of the 19th century properly, the fact that only Japan has the sovereignty and dominion over the Senkaku Islands is obvious, and even if a foreign government appeals to the International Court of Justice, the Japanese sovereignty and dominion over the Senkaku will be accepted rightly by the Court.

2. A solution of troubles over the Senkaku Islands

In recent years, the following opinion is growing up in China.

China does not accept the colonization of Ryukyu (Okinawa) by Japan in 1879*. Ryukyu was a Chinese Imperial rank-awarding letter country from the 16th century to the 19th century. That is, Ryukyu was a country where China superintended and controlled and we may say that Okinawa is a country which originally belongs to China.

*In 1879, the Japanese government incorporated Ryukyu, where had her own monarchy system till then, into the all-prefectures system of Japan. This Japanese government’s action is named “the Ryukyu disposal.” However, Ryukyu was already put under rule of Satsuma Domain and Tokugawa government in 1609. If you want to make an issue of “colonization of Okinawa”, you must take up action of Satsuma Domain in 1609. And It is clear that the Ryukyu disposal means the abolition of a feudal system accompanied by the firm class system and the start of modernization of Okinawa. Many of public of Okinawa of those days welcomed abolition of monarchy or feudalism. Such a fact cannot be disregarded. The Ryukyu disposal was one process of modernization rather than colonization for Okinawa.

In China, this view seems to be becoming stronger bases for the Chinese dominion over the Senkaku. If Okinawa residents accept the Chinese sovereignty over Okinawa, I will not consider that this causes a serious problem. But Okinawa residents never accept the Chinese sovereignty over Okinawa. So I think that this view is unrealistic and very dangerous. Including the interpretation of “disposal” Ryukyu earlier in this blog, I tried to point out the problem of the concept of “Okinawa is Chinese territory”(see my opinion about the Ryukyu Disposal above).

However, the Senkaku issue, I do not want a “solution by force”. It is most appropriate that China sues Japan to the International Court of Justice for the sovereignty over the Senkaku. But there are many factors unfavorable precedent for China. Since China consents to the disadvantageous situation, she will not sue Japan to the International Court of Justice. Therefore, China carries out another basis that Okinawa belongs to China. As a matter of fact, the Senkaku has been a part of Okinawa Prefecture since the late 19th century. In order to acquire the dominion of the Senkaku, China is going to use the most delicate portion of the history of Okinawa.

Considering such a forced and kinky opinion occurred in China,  I would like to propose the following solution.

1. We all have to deny the resolution by force and threats. In order to solve the problem, take a peaceful means of diplomacy and negotiation.
2.It is a premise of discussion for all countries to accept the present condition of Okinawa, i.e., the fact that Okinawa belongs to Japan.
3.Japanese government should accept existence of a dominion problem over the Senkaku between China, Taiwan and Japan.
4.China and Japan should agree to form the organization including Taiwan, which discusses this problem

The new features of this proposal are ;

(1) having separated the dominion over Okinawa from that of the Senkaku.
(2) proposing establishment of the organization by three nations, China, Taiwan, and Japan.

China is likely to be unacceptable to the proposal of establishment of the organization including Taiwan. But China sometimes insists that Senkaku belongs to Taiwan. So I think this proposal is not so unrealistic.

Although the above solution is only a starting point, I think that this problem is not solved if a certain amount of time is not spent. Since the economical dependency of both countries is deepening, it is clear that all we cannot find any profits in such a border dispute and possible armed clash. 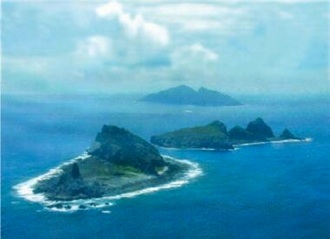